Due to concerns about the Corona Virus (Covid-19), The Brasstown Community Center is closed until further notice.  Those who need to access the wifi can still do so from the parking lot.

Please avoid contact with other people as much as possible, avoid crowded areas, practice good sanitation practices, and protect those who are ill, in poor health and/or elderly.   Consider making phone calls to check on vulnerable family, friends, neighbors and members of the community to make sure they have adequate food and medications.

Due to Covid-19 the May 2020 bluegrass concerts at the Brasstown Community Center have been canceled.  The June concert will be re-evaluated next month.

We are pleased to announce the lineup for the 2020 Summer Concerts. Some tried and true favorites are returning and we have a few new additions this year. We hope to see you at one or all the concerts. Bring your friends and family and enjoy some great bluegrass music!

The concerts are held May through August on the second and fourth Saturdays. Doors open at 6 p.m. and the music starts at 7 p.m.  Admission is $8, children under 12 are free. Hot dog and barbecue sandwich plates, homemade cobbler, ice cream and root beer floats will be available for purchase.

The center is a non-profit, and all proceeds from the concerts and facility rentals are for maintenance and upkeep of the building. The Brasstown Community Center is a 501C3 charitable organization.  Any and all donations will be greatly appreciated!  Checks can be sent to Brasstown Community Civic Center, PO Box 111, Brasstown, North Carolina 28902.

The Brasstown Community Civic Center is proud to be a part of the Blue Ridge Music Trails of North Carolina. Visit BlueRidgeMusicNC.com to find festivals, concerts, jam sessions, and plenty of singing and dancing to the Traditional Music of Western North Carolina. 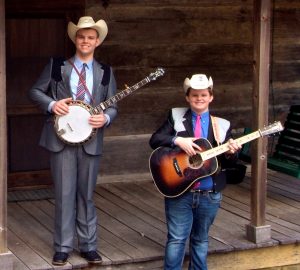 Born and raised in the hills of Western North Carolina, Jonah and Grayson Riddle have grown up with bluegrass heritage all around them.  At ten years of age, Jonah’s grandad began to teach him to play dobro. With his grandad at his side, he began to dive deeper into music, until one day he picked up a banjo and knew that this was the instrument for him!

At a very early age, Grayson also learns to play guitar from his grandad. His love for this instrument quickly grew as he would stand in church ad hold his guitar and just strum, even though he didn’t know how to fully play it yet. In addition to guitar, Grayson can play the upright bass and electric bass.

Photo from left to right: Grayson and Jonah Riddle 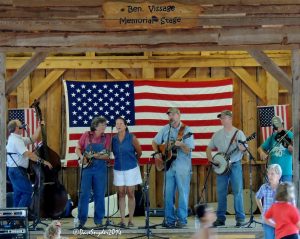 Chatuga Ridge Bluegrass is a traditional bluegrass band with members located in the upstate of South Carolina. The band was first formed in 1988 by Mark and Jody Vissage.

When Jody’s brother, Chris King, then banjo picker, had to move downstate for a job promotion, the band was disassembled until the spring of 2010.

At that time, Mark and Jody Vissage got together with Truman Nicholson and David and Jan Bryant to restart the group. Finally, Lane Holcomb joined the band in 2014 giving us the band as it exists today. 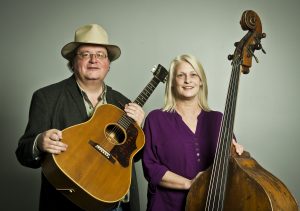 The Lone Mountain Band has established itself as one of the top Bluegrass bands of the Tennessee valley by former High School classmates Bobby Burns and Diana Phillips.

Bobby was born into a musical family. He plays many instruments, but mostly the mandolin and sometimes the fiddle or guitar. Bobby has played in professional bands since his teenage years. He sings lead and harmony vocals and does most of the MC work for the band.

Diana Phillips was trained as a classical pianist. While in college in Virginia she was exposed to Bluegrass music and fell in love with it. After school she moved back to Chattanooga where she teamed up with former classmate Bobby Burns. In addition to her skills on the bass fiddle, Diana is an excellent singer and songwriter. 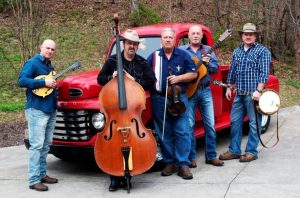 The band traveled across the North Georgia mountains for about 30 years participating in festivals, private events, fund raisers, community events and what ever else they were invited to be a part of. There were limited band member changes during those years.

2019 brought new life to Blue Ridge Grass. Longtime members Greg and Jamie joined Perry Suits, Jeff Graves and Robbie Mathis to revive the music of BRG. Jeff can bring a tear to a glass eye with his lonesome vocals, Robbie keeps the group in time with a solid bass line and Perry needs no introduction as bluegrass is a family tradition in the Suits family. 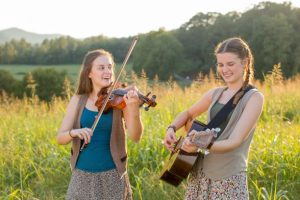 Twin sisters, Katie and Corie Pressley, were born and raised in the Appalachian mountain community of Brasstown, NC. They play a mix of original, folk, gospel, appalachian music. The girls enjoyed a musical influence literally from their arrival home from the hospital. Jerry Wilson, their grandfather, who they call Pap, was a musical legend in their neck of the woods.

Jerry performed for many years as part of The Wilson Brothers. The duo performed gospel music in the polished high harmonies of the classic brother duet style. Over the years they have won many awards, produced numerous recordings, and were featured in several publications.

The girls tell the story of laying in their bedroom floor with ears pressed tightly to the floor to hear the sounds of music flowing up from the basement as Pap and his band practiced. Katie says “Mama would make us go to bed but as soon as the lights were out we’d sneak from the covers, lay in the floor, and let the music lull us to sleep.” 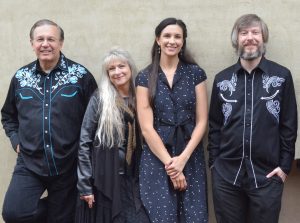 They made their Carnegie Hall debut performance in New York City in 2015. In 2016 they performed in concert at the historic Ryman Auditorium in Nashville, TN and were nominees for 2016 Georgia Music Awards for Americana/Bluegrass artist of the year. They have toured in Canada, Europe and Asia as well. It is always a pleasure to welcome them in Brasstown.

In addition to his singing and songwriting skills, Chuck Nation is equally skilled at playing fiddle, banjo, mandolin and guitar. Susan Nation (vocals/acoustic bass), is an acclaimed singer and songwriter who has performed Bluegrass around the world. Her singing and her solid bass playing skills provide a firm foundation to the band.

Libby Nation (vocals/guitar/mandolin/piano), sings and plays many instruments equally well. She teaches private music lessons to a full schedule of students in Atlanta, Alpharetta, and Gainesville, GA. Jody Hughes (banjo/guitar), is a multi-instrumentalist and vocalist from Canton, GA. He has performed bluegrass, solo jazz guitar, and popular music in various ensembles throughout the Southeast. 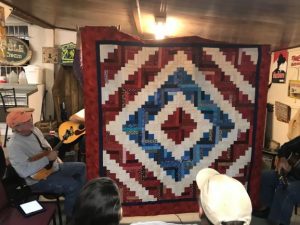 Here it is, the 2020 quilt we are raffling as a fundraiser for the Brasstown Community Center. The quilt was generously donated by Deanna Skubal again this year.

Deanna has been a tireless supporter of the community center and has donated quilts for the last 5 years! We appreciate her artistry, quality workmanship and her generous heart. Thank you Deanna!

This is a queen size quilt that can been seen at Clay’s Corner most days or at any of the fundraising events held at the community center, especially during the summer concerts between May and August. Raffle tickets are $1 each or 6 for $5 and for sale at Clay’s Corner.

The quilt is awarded during our Thanksgiving Community Pot Luck in November. You do not need to be present to win. The Brasstown Community Center is a 501.3c non-profit organization – we survive on your donations.

The Brasstown Community Center has immediate openings for two positions. One position is for inside cleaning and the other requires maintenance and lawn care. Applicants must be over 55 years of age.

Every month the Brasstown Community Center hosts a community potluck on the third Tesday of the month so we can come together, share food and see friends. In November, we host the Thanksgiving potluck. The Community Center supplies turkey, ham, mashed potatoes, dressing and rolls and the community shares vegetables and desserts.

Each year, it is an amazing event allowing us to recognize our volunteers throughout the year, hold elections for Board Members and raffle off a quilt as part of our fundraising efforts. This is a time for the community to come together, celebrate what we all love about Brasstown and share fun and food with each other.

Congratulations to our 2020 Board Members:

Here are a few pictures of the 2019 Thanksgiving potluck – thank you to the Teems family (Kathy, Emily and Katie) for their tireless efforts in the kitchen, and to all the volunteers who set up tables, decorated, and helped clean up afterwards. This event would not be such a success without you!

Getting ready in the kitchen! 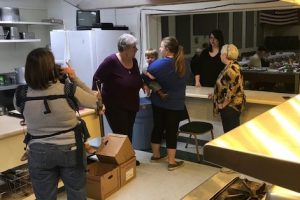 In line for food – the best part of the evening! 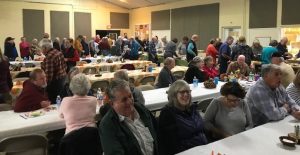 Leftovers on the foreground… 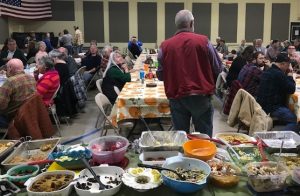 This year’s quilt winners – Mr. and Mrs. Bob Myers of Atlanta
(pictured with Clay Logan in the center) 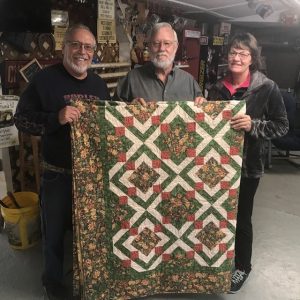 Each year, the Brasstown Com 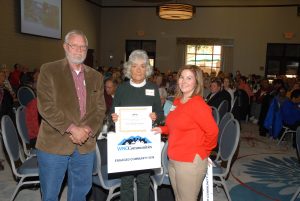 The 65 communities participating in this year’s WNC Honors program represent 5,500 volunteers with an impressive 195,500 hours in outreach programs dedicated to beautification, conservation, education, health & wellness, and the local economy.

We submit a description of our community center, its activities, projects, and volunteer activities.  WNC Communities rewards services like ours all across  Western North Carolina.

This year, Clay and Judy Logan represented the community center at the annual Awards dinner in Asheville and accepted a check for $500 on behalf of the Brassstown Community Civic Center.

For more information about the program, visit their web site at: wnccommunities.org

As of March 2018, the rental fees for the Brasstown Community Center facilities are as follows:

For Brasstown residents living in the 28902 zip code, the rental fee for the main building (gymnasium/kitchen) is now $60/day.

For all others, the rental fee for the main building is $80/day.

The rental fee for the new schoolhouse annex (classrooms) is $25/day.

The kitchen rental is $5/hr with a 4 hour minimum. The kitchen facilities are still available to local residents for free for their personal canning needs.

The cleaning deposit for all rentals is $50. The deposit is due at the time the reservation is made.

The Brasstown Community Civic Center is proud to be a part of the Blue Ridge Music Trails of North Carolina.

Visit BlueRidgeMusicNC.com to find festivals, concerts, jam sessions, and plenty of singing and dancing to the Traditional Music of Western North Carolina.

Our Summer Concerts are held May through August on the second and fourth Saturdays. Doors open at 6 p.m. and the music starts at 7 p.m.  Admission is $5, children under 12 are free. Hot dog and barbecue sandwich plates, homemade cobbler, ice cream and root beer floats will be available for purchase.

The Brasstown Community Civic Center is located at 255 Settawig Road, just north of the Post Office. The center is a non-profit, and all proceeds from the concerts and facility rentals are for maintenance and upkeep of the building.

The BCCC is a 501(c)(3) corporation supported by donations and fundraisers. We hope that you will help support our cause!

We’re on the Trail

We use cookies to ensure that we give you the best experience on our website. If you continue to use this site we will assume that you are happy with it.I understand